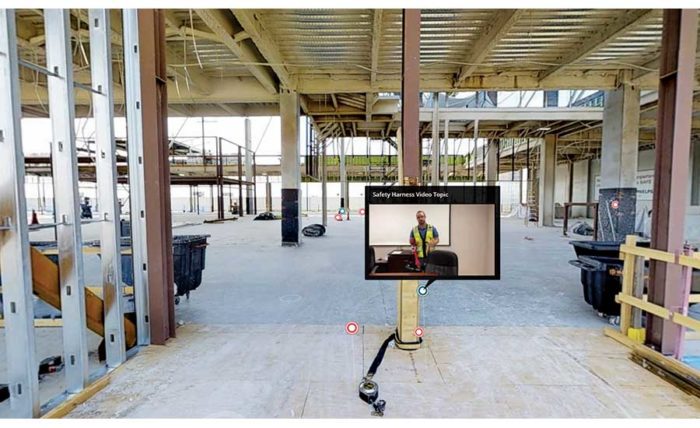 A new industry study says the same technologies that contribute to more efficient construction projects are helping to make jobsites safer. The use of drones, virtual reality and wearable devices are poised to join building information modeling, cameras and other project-management tools in shaping safety planning and training.

For example, nearly 70% of contractors using BIM say the technology has had a positive effect on project safety, a 27-point increase over the past five years. Common benefits of BIM include identifying potential site hazards before construction begins, clash detection, prefabrication support and creation of 3D images.

Those and other findings on industry safety management are highlighted in a recently released Dodge Data & Analytics study, conducted in partnership with the Center for Construction Research and Training (CPWR) and United Rentals. The latest in a series of periodic assessments that began in 2012, the study identifies technology trends that can improve construction safety and how they are likely to do so in the future.

Safety is not always the primary driver for adopting these tools, but firms are realizing and embracing their potential safety benefits, says Donna Laquidara-Carr, research director for Dodge Industry Insights. She notes that the 2017 study confirms a significant jump in worksite safety improvements that were first identified in the 2012 report.

“It’s good to see that this is a trend,” Laquidara-Carr says. She partly attributes the change to growing contractor sophistication with BIM and its capabilities. “In many ways, it’s a mature technology among contractors,” she adds.

Evidence of this trend can be found at the Des Moines, Iowa-based Weitz Co., which uses BIM during initial project planning and at weekly 3D project coordination meetings.

“We visualize how work will proceed and whether there are any safety factors that need to be addressed,” says Greg Martin, the company’s senior manager of operational excellence. BIM also is used for logistics planning to determine the best locations for people and materials.

But bringing BIM and its benefits to the field is a “constant struggle” because not all specialty firms possess either the resources or the sophistication to use the technology extensively, Martin adds.

Where possible, Weitz employs on-site “BIM boxes,” complete with displays and project information, to help subcontractors visualize specific tasks. For firms that may not yet be in the “BIM world,” Martin says Weitz creates 3D PDF files with elements of the BIM model.

“It may be several years before they get up to speed with BIM,” Martin says. “This helps fill the gap.”

CPWR Executive Director Chris Trahan Cain is also concerned that small contractors may not have access to the most recent safety technology. “You won’t see a 10-person contractor designing with BIM,” Cain says, “but you will see them exposed to it by general contractors who can help bring them along.”

Those firms may well find other, everyday technologies within reach. The Dodge study reports widespread use of smartphones and tablets at jobsites, with nearly 85% of all contractors using digital cameras to document site conditions and work progress—information fundamental to safety planning.

However, small firms may lack the software or expertise to make full use of that imagery. “Putting that information to work may well be the bigger obstacle,” Laquidara-Carr says.

Mobile devices may be underused for safety in other ways, as well. The study found that only 42% of contractors take advantage of safety-inspection checklist apps, while even fewer report using mobile devices for training or accessing safety and health websites.

On the other hand, Cain suggests that having QuickTime and Skype in a smartphone affords instant contact between the jobsite and the office when questions arise. “It’s an unsophisticated use of the device,” she says, “but it is aiding safety.”

Several newer technologies at construction sites hold great potential for enhancing safety, the Dodge report says. More than 20% of contractors now use drones to promote on-site safety for functions such as reality-capture, which, in turn, allows for digital analysis of existing conditions.

Wearable safety devices—badges with coded electronic information, sensors and “smart” helmets, for example—may well offer the greatest potential to make jobsites safer, according to the study. Though wearables currently are used by only 13% of contractors, 82% of firms that use them report a positive impact on safety.

“Adoption of wearables could grow in step with familiarity with the technology among contractors—and lower costs,” Laquidara-Carr adds.

Another emerging technology, virtual or augmented reality, was included for the first time in the 2017 Dodge safety-management study to track its growth as a safety-training tool. Only a relatively small percentage of respondents cited the technology as having a great benefit to safety, but that, too, could evolve in the coming years, Dodge says.

The study cites the $270-million Austin-Bergstrom Airport expansion as an example of how virtual reality can be used to train workers.

Seeking a way to make safety training more relevant, William Plato, VDC manager at Hensel Phelps Construction, worked with Sam Merrell, the company’s director of safety and health, to repurpose 360° camera images, taken for quality control, for a virtual jobsite that can be accessed on company computers or a worker’s own devices.

As users navigate the site like a video game, they are expected to recognize hazards, such as proper ladder use or fall protection, and prompted to identify where specific practices are detailed in the company’s safety manual. Clicking a nearby button opens a brief video on each topic.

“We could never be sure workers were engaging with other teaching tools,” Plato says, referring to conventional methods such as lectures and films. But using the virtual-reality training, “they have to use the underlying safety material to understand the scenarios and what has to be done,” he observes.

Because it is costly to develop a project-specific virtual-reality training tool, Plato and Merrell hope to develop a library of generic workplace scenarios that can be deployed at other HP project sites. Further, Plato would like to develop tools for larger environments, covering topics such as mass excavations, site logistics, traffic control and public interaction.

Plato says the response to the virtual-reality training tool has been positive, though measuring direct effects on worksite safety may be difficult. He notes that, while the tool is simply a different way to meet OSHA-training standards, “it should improve safety because there’s more enthusiasm for using it.”

Cain thinks more research should be done to investigate the effectivness of virtual reality on safety training. “We want to evaluate what it’s providing and how it compares with other approaches,” she says.

Could construction safety be enhanced by addressing potential risks in the schematic design stage? That approach, called Prevention through Design (PtD), was included for the first time in the 2017 Dodge safety management study by surveying architects on the issue.

Eighty-three percent of design respondents reported having worked with general contractors and key trades to identify opportunities for prefabrication, while nearly two-thirds perform reviews for operations and maintenance. Just over half of them review schematic drawings for construction-phase safety.

Donna Laquidara-Carr of Dodge Data & Analytics notes that, while there are few differences between reviews for operations and maintenance, many architects are reluctant to take on construction liability. What’s more, project owners are not encouraging their designers to use PtD.

“If that changed, the practice could become more routine,” she says.

Greg Martin of The Weitz Co. says that, although he has seen no push for PtD, there has been some movement toward incorporating features, such as establishing locations for permanent anchor points, that can be used during construction and later by maintenance staff.

“Obviously, the earlier we can get involved with a project, the more safety risks we can address and mitigate,” Martin says.