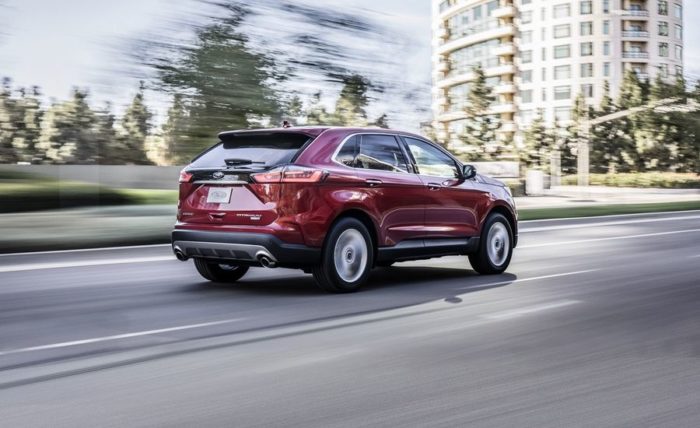 A streamlined engine lineup could be a double-edged sword.

And then there were two—Ford Edges, that is. The stylish mid-sizer’s lineup has been updated and pared down to include only two engines. For 2019, Ford’s second-generation twin-turbocharged 2.7-liter EcoBoost V-6 is exclusive to the new Edge ST, which replaces and builds on the athleticism of last year’s Edge Sport. All regular Edges now are powered by a turbocharged inline-four EcoBoost engine featuring 2.0 liters of displacement. The mid-level, naturally aspirated 3.5-liter V-6 option is gone.

Everybody is sure to be talking about the new Edge ST’s 335 horsepower, but it’s of some significance that Ford has switched the rest of the Edge lineup to four-cylinder power. The 2.0-liter turbo four carries over from last year with an additional five horsepower, bringing its total to 250; peak torque is unchanged at 275 lb-ft. (For comparison, the now defunct 3.5-liter V-6 made 280 horsepower and 250 lb-ft.) Ford promises that Edges equipped with the four-cylinder EcoBoost will be more efficient than before but has yet to release fuel-economy numbers.

In a bid to help both the four-cylinder’s fuel economy and its performance is a new eight-speed automatic transmission shared with the ST. Previously, every Edge utilized a six-speed automatic. Auto stop/start also is standard, as is front-wheel drive. All-wheel drive is an option, although it is included on the ST. That model also benefits from tuning that extracts snappier responses from the eight-speed, and Ford tosses those buyers paddle shifters to bolster the ST’s performance edge over regular Edges.

Even edgier is Ford’s decision to throw the kitchen sink (filled with active safety features) at its roomy, two-row mid-size SUV. For 2019, every Edge gets automated emergency braking, forward-collision warning, blind-spot monitoring, lane-departure warning, lane-keeping assist, and automatic high-beams as standard equipment. This follows the lead of Honda and Toyota, the former of which has expanded the availability of such features to even base trim levels of the Fit, Civic, and Accord, while the latter has committed to making similar equipment standard across its lineup. Ford also will offer a new evasive steering-assist feature, which supports and bolsters defensive steering inputs based on forward radar and camera data. The adaptive cruise control now can bring the Edge to a full stop and offers a degree of self-steering on the highway.

Changes otherwise are minimal and headlined by a wider grille design, a reshaped hood, and new standard LED headlights. None of the styling tweaks alter the Edge’s signature blocky and substantial look, although the front end appears bluffer than before. Inside, the center console has been reconfigured to accept a new rotary-dial shifter like that in the Fusion sedan, but the rest of the five-seat cabin is otherwise familiar. Ford has tailored the Edge’s Sync infotainment setup to support a Ford+Alexa app that enables drivers to access their smart-home assistant from inside the car. (The link works through a connection to a smartphone—Alexa isn’t built into the car.) A Wi-Fi hotspot capable of supporting 10 devices and an onboard data connection is standard on every 2019 Edge.

Pricing isn’t available yet, but Ford says the model will continue to be offered in SE, SEL, and Titanium trim levels. (Again, the previous Sport trim has been discontinued in favor of the ST, which we describe at length elsewhere.) Time—and sales—will tell whether Ford’s decision to lose the Edge’s 3.5-liter V-6 option was a good one. In our testing, the four-cylinder, pre-refresh Edgereached 60 mph in a slowish 8.3 seconds, 0.7 second slower than its 3.5-liter sibling. The 315-hp 2.7-liter Edge Sport, on the other hand, was significantly quicker, making the run in 5.6 seconds. No Edge is what you could consider lightweight, something unlikely to change with the 2019’s minor tweaks.

Even if non-ST Edges turn out to be pokey, they’re unlikely to lose their handling advantage over doughy competitors like Nissan’s Murano and Hyundai’s Santa Fe Sport. Nor will we cease to find ways to incorporate too many “edge” references into our coverage of what is now a double-edged lineup.